As reported by The Next Web Google reveals its plan to penalize google play store apps which do not have valid privacy policies.

According to Google Play store Guideline user data policy, App publishers must have “transparent” in how they collect and handle user data.

Google has started sending notices to developers across the world revealing its plan to “limit visibility” or remove apps from the Play Store that violate the company’s User Data policy. For most developers, the violation seems to be a simple one: Lack of a privacy policy

And App developers have until March 15 to make the privacy policy addition, or Google warns “administrative action will be taken to limit the visibility of your app, up to and including removal from the Play Store.

Here’s the full text: Source The Next Web 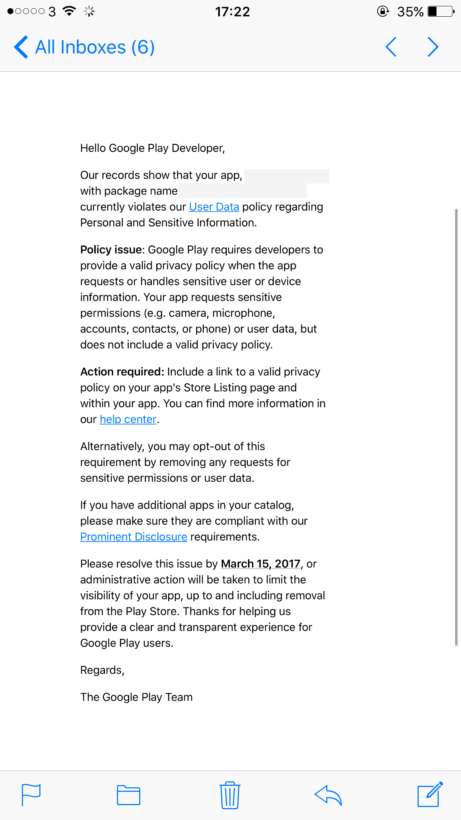 This action will help the android developers to stand out from this crowded market. And This will make it easier for people to be able to find our app’s with better keyword searches and find much more relevant results.

Many app developers are welcoming the move taken by Google.

I think it’s fantastic, this will clear the Google Play store of so many junk and zombie apps that our games will find increased visibility on the store as the search terms will become much less cluttered.

Developers can add a link to a valid privacy policy which submits to Google’s Store Listing page, as well as within the app itself until March 15 this year. Alternatively, developers can simply remove the permissions request to collect sensitive user information.

If app developers ignore the warning, their applications are at risk of being nowhere in the App Store or removed altogether.

Pranay is a versatile leader & IT entrepreneur with a proven track record of more than 10 years working with several international brands & help them develop successful web & mobile solutions. His philosophy is that IT is a business enabler. Therefore, he is differentiated with his know-how knowledge, & being able to strategically & cost effectively align both business goals & IT strategies together by applying cross-industry experience. He loves to find solutions to the most challenging IT problems & being creative at same time.

View all posts by Pranay Mathur →